This is Me, Learning About How I Learn

by Gary Chapin, Consultant and Writer for Educating for Good, Boston.

We free the chickens. Well, not all of them. Trial and error can be harsh.

I met with Dave Hamilton at the Explo office in Norwood, Massachusetts. Explo is a non-profit org devoted to creating innovative learning experiences for kids. 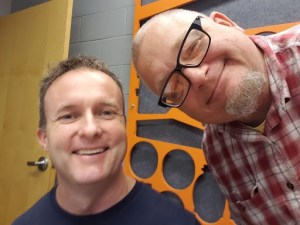 This is Dave Hamilton on the left and me, Gary, on the right in the workshop at Explo.

I’ve been invited to try out an in-development kid task with an eye toward getting a sense of what did it feel like to do the task? We weren’t evaluating the task—is it good enough—we were telling the story.

And what a story! Task development is intense when you have fabricators on staff and a warehouse full of materials.

The premise of the task is that you have to get these chickens down a ramp, and… Wait, here’s a video:

So, the task has two elements.

First: Get the chicken in the car down the ramp to stop on the table without discommoding the chicken.

Second: Capture the learning in a way that students or instructors or nosey people like me can use it to learn about learning.

We began immediately with the practical empiricist route, meaning we decided to limit variables in relation to constants (i.e., we would make a single change each time we did a run and note its effects), but we didn’t go so far as to run a control setting. We were not scientists, but engineers, even if we did use the word “hypothesis.”

We were also storytellers!

Without even trying, we improvised this story of chickens escaping a horrible fate at a factory farm. You may laugh—and we hope you do—but engagement is a thing that happens with stories. We were pulling for these pullets! But how to capture the learning?

We made a chart. And even took a swing at a spreadsheet! We planned to video record as much as we could. We did a test run. We framed the problem this way:

What variables do we have to play with? The size of the wheels. The position of the chicken in the car. The pitch of the ramp. We could add speed (push). We had unlimited copy paper, tape, scissors, etc. There was also, “one other resource of your choice.” Not thinking to ask for a radio-controlled car, I said, “What about astroturf? Do you have astroturf?”

Dave said, “Sure thing!” Because Explo’s warehouse is a cornucopia. Of course, they have astroturf. Our process was methodical and meticulous, by which I mean clever and maybe a little ad hoc. Check out this video.

That led to the first of what would be 18 runs. Which means 17 chickens died so number 18, and any that followed, could be free.

We noticed a few things over the course of the task.

We were very excited at the beginning! If this was a montage video, Led Zeppelin would be playing “Whole Lotta Love” or something of that ilk. We were voluble and chatty. “What if we try this?” Or “What if we try that?” Lots of energy! We recorded everything on our phones and charted each variable run as it unfolded.

But the charting became tedious!

Oh. My. God. I don’t want to speak for Dave, but charting the step-by-step process was not helpful, for a few reasons. It may have been helpful to capture the learning for later, but it was an absolute barrier to doing the learning in the now. Like, “Here, while you have this fiery inquiry experience solving this fun problem, let’s insert a step that is so boring that you will go all glassy-eyed and forget CHICKENS’ LIVES ARE AT STAKE!”

We stopped charting. Everything is fresh in the mind for this 90-minute process. We did keep recording on our phones, though, and one of our breakthroughs was watching the recording in slow motion. Noticing exactly when the chicken pitched forward or back and even, at one point, became airborne. So cool.

All of our initial runs were around making different shaped piles of astroturf to manage the velocity and the lip of the ramp. The astroturf was both a friction source to slow the roll and material for terrain, to cushion the shocks. Pretty early on we intuited that this approach wasn’t going to work. Should we continue with our meticulous plan? Or follow our intuition to other areas?

Intuition it was! This is when we began playing with the wheel sizes on the car, which DID make the chicken more stable going down the ramp and over whatever bridge we made over the lip of the ramp. Still, by lunchtime (16 runs) we had not solved it. Ugh. By then we were quiet, discouraged, and—speaking only for myself—torpid.

At lunch—sushi—we did some analysis. For example, we thought that the video was an effective way to capture learning because it was unintrusive, and it could be accessed later and analyzed. There needed to be a separation between the engineer and the documenter. Would it work for a team to have one member be designated the documenter? Is that fair to that kid? Or is there a way to set up a tripod and passively record the entire thing beginning to end, allowing every team member to participate in the inquiry? 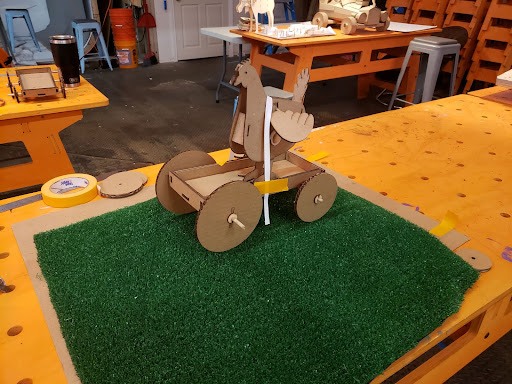 How you answer the question depends on what you want out of the team experience. For example, if you are looking at team dynamics (collaboration), having different members with assigned jobs could be interesting. Also interesting would be to NOT assign jobs but see what roles kids fall into on their own. If you’re using this to assess content—physics, math, storytelling (ELA)—then each kid needs an opportunity to engage the content, and a documenter might not do that (though they might).

What are you after? What evidence are you seeking?

This is a fundamental question that task designers often skip, usually because they think the curriculum or the standards make it obvious. It’s not obvious.

After lunch we went back to the site, still dragging. The end of our day hove into view. Are we cleaning up? Doing more analysis?

He takes a strip of paper, and wraps the chicken, affixing it to the car like a seat belt. We roll. The chicken STAYS IN THE CAR, even as the car rolls off the end of the table.

I use a ream of paper and cover it with the astroturf. We roll again. The chicken comes down, stays in the car, AND rolls up the small hill, shedding velocity, coming to a stop right on top. After all that, we failed to record a video of our victorious run because we’d just gotten that apathetic. “Yeah. Try again. Whatever.” But we did eventually attain a feeling of triumph and celebrated over pizza that night. Also, we raised a glass to all the chickens that didn’t make it.

For another perspective on this project-based learning task, check out Dave’s story of saving the chickens:
“Chicken Run: Documenting Process Without Sucking the Life Out of PBL”

Editor’s Note: This blog post was originally published by Next Generation Learning. Please check out their good work.