This post is part of a series of articles, blog posts, and short briefs produced by EXPLO Elevate focused on supporting schools’ virtual learning during the COVID-19 pandemic.

As we approach the fall, school leadership teams are heads-down, working on their reopening plans – we’ve published numerous ones here. In putting these plans together, school leaders have made multiple assumptions about how best to deal with a complex situation that has a tremendous amount of uncertainty. They have to be able to envision multiple futures, as EXPLO President Moira Kelly shared in a recent EXPLO Elevate Webinar on school reopening planning. Moira also wrote about one specific possible future, that of fictional Brigadoon Academy.

In developing reopening plans, leaders face significant pressure: from parents, students, faculty, the community, and from local, state, and (now) the federal government. And at the same time, they need to take into account the unique attributes of the school, the likely infection rates in the local community in the fall, the actions of peer schools, and the potential for medical treatments or a vaccination for the virus.

Now that school leadership teams have drafted and are starting to communicate their reopening plans, they must next focus on operationalizing all the aspects of the plan – the facility changes, the supplies needed, the curriculum and schedule updates, and the health protocols. But there is one other important activity they should undertake: conducting a pre-mortem on their reopening plan.

But there is one other important activity they should undertake: conducting a pre-mortem on their reopening plan.

What is a pre-mortem?

We are all likely familiar with the medical practice of conducting a post-mortem on a deceased patient to understand the cause of death. And businesses and nonprofits have also adopted the term “post-mortem” to assess all sorts of project and product failures.

A pre-mortem is a very different approach in which you imagine a future in which the event – a project or product launch, or the reopening of school this fall – has already transpired and failed miserably, and then reflect back on it to identify why it failed. The technique was introduced by Harvard cognitive psychologist Gary Klein in a 2007 Harvard Business Review article. It is based on research findings that “prospective hindsight—imagining that an event has already occurred—increases the ability to correctly identify reasons for future outcomes by 30%.”

I first learned about pre-mortems in an excellent Freakonomics Radio Podcast back in June of 2014 in which Klein is interviewed by host (and EXPLO parent) Stephen Dubner. At the time, I was leading several large, strategic projects for my prior organization, FIRST, which runs the world’s largest K-12 robotics program. We were undergoing a major transformation to launch new websites, new systems, and even a new version of the FIRST program designed for use in the classroom. We conducted pre-mortems on several of these large, mission-critical projects to identify potential pitfalls that might derail them, and found it to be a very practical and useful risk management tool.

Here’s why it works.

Psychologists believe that people tend to overestimate the probability of good outcomes and underestimate bad outcomes or failure. This is known as planning fallacy, a phenomenon proposed by Nobel laureate psychologist Daniel Kahneman and his colleague Amos Tversky in 1979. Our plans tend to reflect our optimism, and often underestimate the time, costs, and risks of future actions. Yet other people can often see the weaknesses and potential pitfalls of our plans, but are afraid to speak out since they wish to avoid conflict or are worried they will be viewed negatively or “not a team player” by leaders. Nobody likes the kill-joy — you don’t want to be “that person” who is known to frequently criticize the organization’s plans.

At other times, the momentum behind a plan or big launch is just too great to stop it. In the Freakonomics episode, Klein and Dubner discuss the space shuttle Challenger disaster, and how engineers from the firm Morton-Thiokol believed there was a high risk of failure of the space shuttle’s O-rings due to the cold weather forecasted for launch day. In this case, several engineers spoke up, but their opinions were disregarded – there was too much pressure to move forward with the launch, and as we know, disaster struck.

Group dynamics are different when you conduct a pre-mortem. During a pre-mortem exercise, you are granting the entire team the permission to be skeptical, to poke holes in the plan, and express negative views. You can even create a friendly competition to poke as many holes in the plan as possible. People are free to question, and conducting a pre-mortem with a group can generate new risks that might not have been identified if done individually. The more diverse opinions you have in the group, the better.

One cautionary note: it takes a strong leader to invite criticism of their plans, one who welcomes feedback and won’t later hold anything against team members or other stakeholders. Teams that have a high degree of psychological safety may be more comfortable doing a pre-mortem. We also believe that conducting pre-mortems as a regular practice can build psychological safety and improve team dynamics over time.

Conducting pre-mortems as a regular practice can build psychological safety and improve team dynamics over time.

Here’s how to conduct one.

Below is a process for conducting a pre-mortem on a school reopening plan. 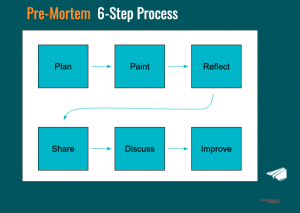 For those people who don’t want to focus only on failure, there is a version of the pre-mortem exercise that breaks the team into two groups – a “failure team” and a “success team” which envisions a smashing success and identifies all the reasons why the event was successful.

We advocate that schools look at both outcome extremes, allowing them to juxtapose the path to success against the potential for failure. We’ve named this a “Best Case/Worst Case Pre-mortem Workshop.” We facilitate the process similar to the one described above, but add in the success team, followed by a facilitated session in which participants reflect on the two outcome extremes. We seek to gain consensus around which elements of each scenario are most likely to occur. It can be a powerful tool to enable teams to envision the full range of potential outcomes, and prepare them better to face the uncertainty ahead.

Whichever approach you take, EXPLO Elevate strongly encourages all school leadership teams to conduct a pre-mortem exercise in the days leading up to reopening day. Even if the exercise uncovers only one previously-unidentified weakness in the plan, that weakness could be the one that results in a devastating outcome. If you need assistance with or guidance on conducting a pre-mortem workshop, don’t hesitate to reach out to us.