In Conversation with Okorie Johnson

How can a cellist make something foreign feel sacred enough to soothe the soul?

Okorie Johnson is an American cellist-songwriter who performs under the moniker OkCello. His artistry integrates cello performance, live-sound-looping, improvisation, and storytelling – all culminating in original compositions that collide classical with jazz, EDM, reggae, and funk. You can read more about him and listen to his music on his website: www.okcello.com.

Okorie will be participating in the SEED+SPARK “Spark Series”—a collaboration with with 180 Studio and Big Questions Institute—Thursday, April 8, 2021, at 8pm EST 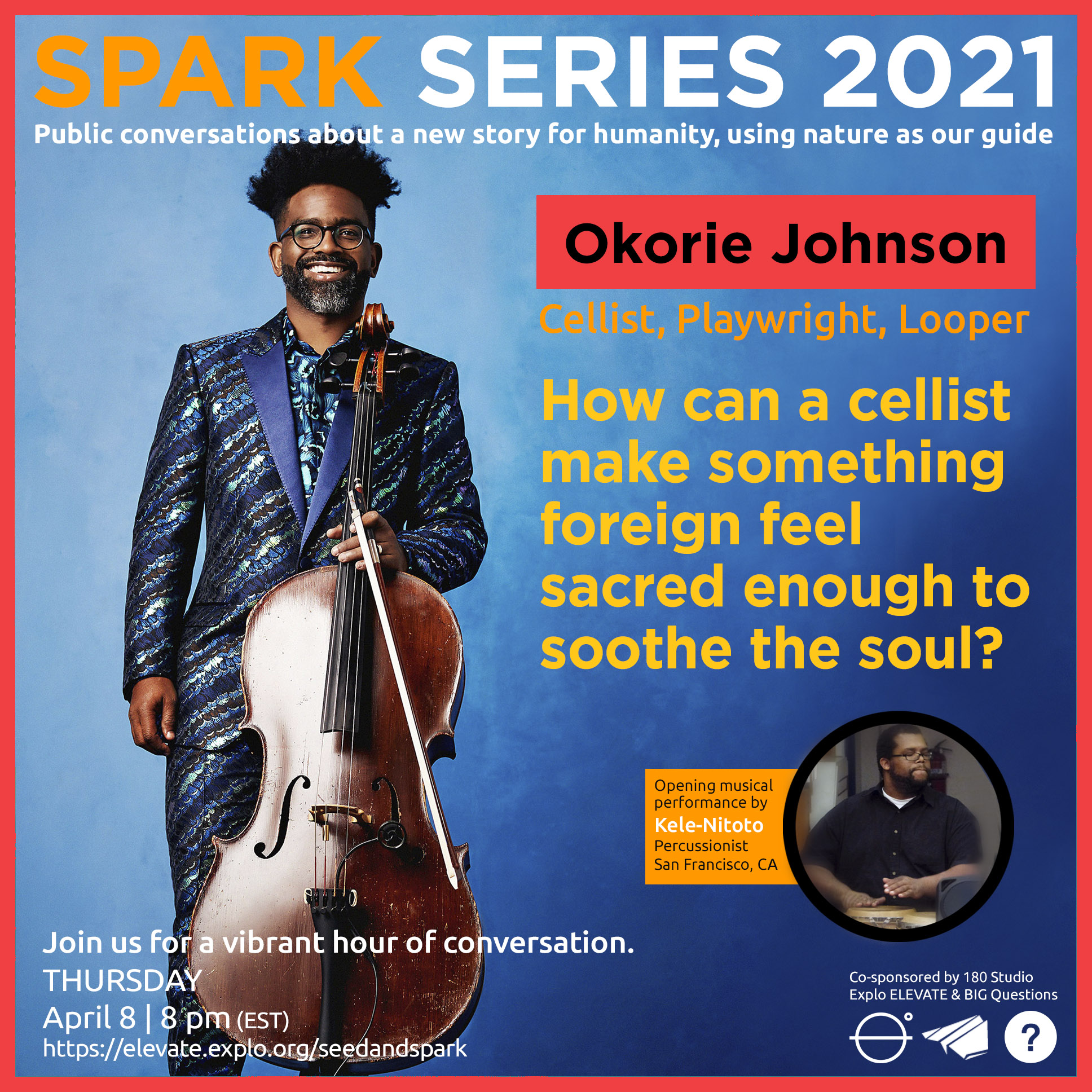 What are the seeds, or sources that form your greatest inspiration?

I’m actually on the road right now driving [from Georgia to Washington D.C.]. I am there to attend a funeral of one of my family members but one of the other things that is also inspiring the trip is that I want to go back and spend some time with my grandfather’s grave. There are some things that I personally am struggling with, that I think he was struggling with, or perhaps that I learned to struggle with because of him that I want to go and reconcile.

I wouldn’t necessarily say that D.C. is inspiration, or that my grandfather is inspiration, but I would say that my personal story, and whatever I’m negotiating at the time is almost always the most significant inspiration for my work and for my art.

The reason why I am talking with you all on Thursday [at the Seed Talk] is because of the work that I’ve done as OkCello. This work directly comes out of a period of my life when I was turning 40 where I was in a lot of emotional distress. And what I was doing – I was kind of playing on my instrument as a form of meditation. And it was out of that praying and out of that dark time that came this really amazing, beautiful set, really, of going to my instrument with emotion or personal experience and using the technology of the looper.

I have put [the cello] down many times, when it wasn’t practical or appropriate to play. And it has always found a reason to resurrect itself in my life. Without my really understanding its reasoning and it leaves me thinking that [the cello] makes things happen for me that I wouldn’t make happen and as a result, it shapes, experiences and [offers] consciousnesses that might have been inevitably in my path, but I certainly didn’t think on it.

What has been a pivotal journey or experience for you?

I had to do the necessary to survive that gauntlet of peril. The consciousness is one where you become really, really critical of any risk that might bring you in close contact with failure.

Your thoughts and your actions and your behaviors – you’re really, really measured in the kind of exposure you take. And in some ways, I think it requires that kind of consciousness, because if the entire world or good majority of it is perceived to be a threat, and you don’t have any power, then you don’t believe that you have any power to overcome the threat, and all you can really do is survive the threat, then you cannot believe what you have to believe about those perils in order to avoid them.

If the entire world or good majority of it is perceived to be a threat, and you don’t have any power, then you don’t believe that you have any power to overcome the threat.

I went to a prep school and graduated and went off to go to college. And I’ve been able to do things that some people in my community haven’t. I don’t have a billion dollar industry behind me or anything like that. But for a lot of people in my community just to be comfortably and reliably middle class was a big deal. It’s a great aspiration. Yes, I hit that marker. Yet the primary motivation was shame: you can’t be this and you can’t do that. And if you are going to do those things, then you’re not worthy of love. These are not sentences that anyone ever said to me. But this is the implication of “do well in school” and all those things,

I think that is great if your ultimate goal is to achieve accomplishment and hit those kinds of external public markers that demonstrate that you have either arrived and you’re doing what you’re supposed to be doing. I don’t really think those tasks at the end of the day are all that rewarding. To me, the more personal tasks are rewarding, I spoke earlier of this desire to give back and what I want to give back is something that’s very real and tangible and impactful.

It’s very difficult to kind of be terrorized by the specter of shame. It’s risky work that I am taking on both personally and professionally. It’s the kind of work that requires being forgiving, and generous of yourself and others. It’s the kind of work where you have to trust yourself, and you have to trust either your spirituality or universe like you have to trust. Because if you don’t trust, then you won’t take the risk. I’m still terrified of being a failure. I’m so terrified of being or doing anything that is considered inappropriate or problematic. And I’d like to be different. This journey [this trip to D.C.] is about that. This journey is about confronting shame. 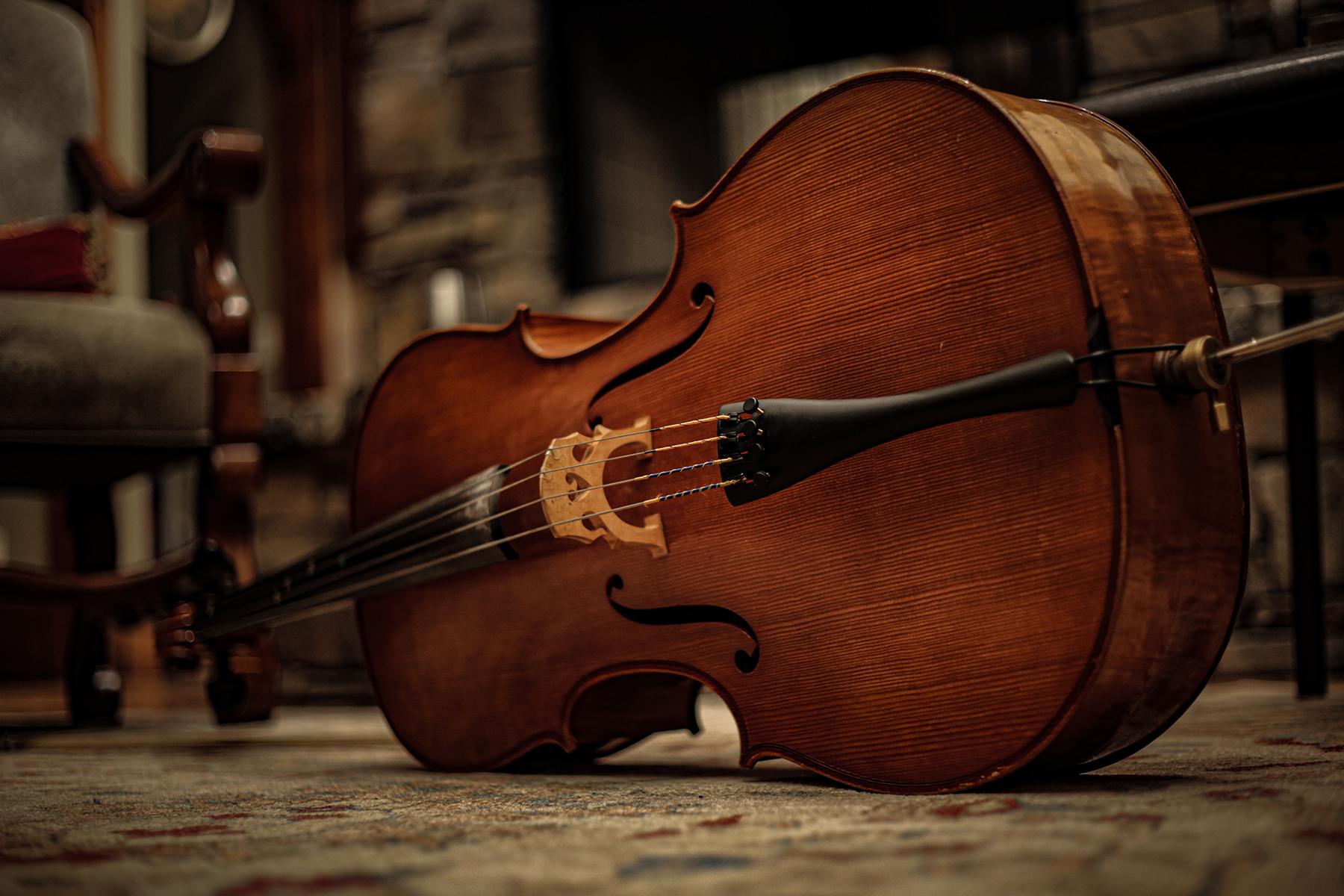 Is there anything that is capturing your imagination right now?

I’ve been thinking a lot about my future self. thinking a lot about the idea of communicating with my future self. And then the idea of destiny and fate and interplay between the two, Part of me believes that, I’m going where I’m going, regardless of whether I know where I’m gonna go. But I’m also profoundly preoccupied with making the right decision. So maybe what’s at the center of all of that is I’m looking for trust and making sure I have that the way I’d like. I’m thinking about [the question] how can you connect with the future you, the one that you want to bring into fruition?

What is necessary to consider when it comes to the future of learning?

We live in a world that has been produced by profoundly significant crime. I don’t think there’s any way of getting around that. There are people who were disadvantaged from those crimes, but they’re people who were also advantaged, and generations that were advantaged from those crimes. And when we have conversations about things like equity, making sure that every child has what they need when and where they need it – it is upsetting because it sanitizes that crime and turns it into an act of God – something that just happened, rather than something that was done to a portion of people by another portion of the population.

I might be working with several artists in Atlanta talking about the1906 race riots, but just that particular event, which happened in downtown Atlanta, and nobody actually thinks about, or knows about all that much right now, had a very real consequence, and very real impact that still reverberates for families and communities today. I’m less interested in the ideas that sanitize the crimes and turn them into these acts of God. Because I think certain people have got to acknowledge how they benefited from those crimes. I don’t believe that there’s all that much justice that can be done if we’re not acknowledging that. And, I struggle with the idea of talking about students in the abstract and in the broad sense because the experience of students in this country is so varied, depending upon their relationship to those crimes.

I hate when people start talking about leveling the playing field. Because at the end of the day, it’s like, you get to college, and you got your degree, and you can get your middle class job and good. I mean, let’s clap, right. And I do think that is a measure of success, I do 100% percent think that the measurement of success and the more students that we can get to that plateau, the better the more students or families, the better. But at the same time it doesn’t actually unpack the system that is the legacy of the crime.

We pretend like there’s an order to the system and that there’s a justice to it. And that it makes sense. It doesn’t, because the entire floor of it is built upon crime.

And to be honest, maybe this is the answer to the last question about what is consuming my imagination. This is the thing I’ve been thinking about quite a bit – I am working with a small team to explore this important question using augmented reality – whose crime is important as it relates to our lives right now?

Okorie will be participating in the SEED+SPARK “Spark Series”—a collaboration with with 180 Studio and Big Questions Institute—Thursday, April 8, 2021, at 8pm EST. This series is intentionally designed to be a departure from traditional talks. Join him via this Zoom link to actively participate and discuss the question: “How can a cellist make something foreign feel sacred enough to soothe the soul?”