Education thought leader in STEM education; Founding President and President Emerita of the globally recognized Illinois Mathematics and Science Academy (IMSA); Author of The Power to Transform: Leadership that Brings Learning and Schooling to Life. Dr. Marshall’s complete bio can be found here.

What are the seeds, or sources, that form your greatest inspiration?

For a host of reasons, the response is my mother. She taught autistic, schizophrenic children. And when I came into her school to observe her as a student teacher, the person who greeted me said, “Who have you come to see?”, and I said, “Ms. Pace”, and she said, “Oh, we call her the miracle worker”. I went to her classroom and there was a young child, he was probably 10 years old and he came in and sat down at a small desk and my mother was facing him. The child was extraordinarily agitated. I mean, he just was what you might expect with some autistic children, he was just all over the place that he couldn’t calm down. And so she just took his hands and held them. And then he calmed down just a bit. And then she put her hands on either side of his face, and started talking to him, in very, very quiet tones, I had no idea what she was saying and it didn’t matter. But then I watched her hands, and they started stroking his face. And he calmed down even more, and he put his head down, and she gently lifted his head up. So they always had eye contact. And then over time, I watched this child come alive. And I remember saying to myself at that moment, this is what I want to do for the rest of my life. If I can figure out how to create conditions with intention and design, to bring children to life, that’s what I want to do.

It really put my life on a course. I didn’t spend a lot of time actually with children, I moved into administration after about seven years of teaching. But it didn’t matter. I had the concept of whomever I am working with, my job is to create conditions with intention to bring them alive, no matter what. If it was a system, it was a system, if it was a school, it was a school, it didn’t matter. Bringing alive was my construct, and it remains that way.

What has been one of your greatest journeys, or experiences?

And so the question that I held with my team – What would it take to create a generative and life affirming system of learning and schooling that liberates the goodness and genius of every child and ignites in their truth, the power and creativity of the human spirit for the world? And the response was, it’ll take a new story, it’ll take a new map, and it’ll take a new landscape of learning and schooling, by design. So that became my work when I became a founding president in 1985. And I was struggling with, okay, that, you know, I have articulated that the new story, the new map, the new landscape has constructs, but what are they? What does that mean?

And if science can change its mind about the world, then we can change our mind about what learning and schooling are supposed to look like. And so I met with my science team and said you got to read this book. And you got to teach me about systems, living systems, chemical systems, biological systems, natural systems. And that’s what we did. I learned with them, and had been on this journey, studying with people like Fritjof Capra and Margaret Wheatley, and others who are thought leaders in living systems. And hence, my book, the Power to Transform the dynamics and principles of life and living systems. Seed and Spark is the next iteration to that if you will – using nature’s principles to design a new story. 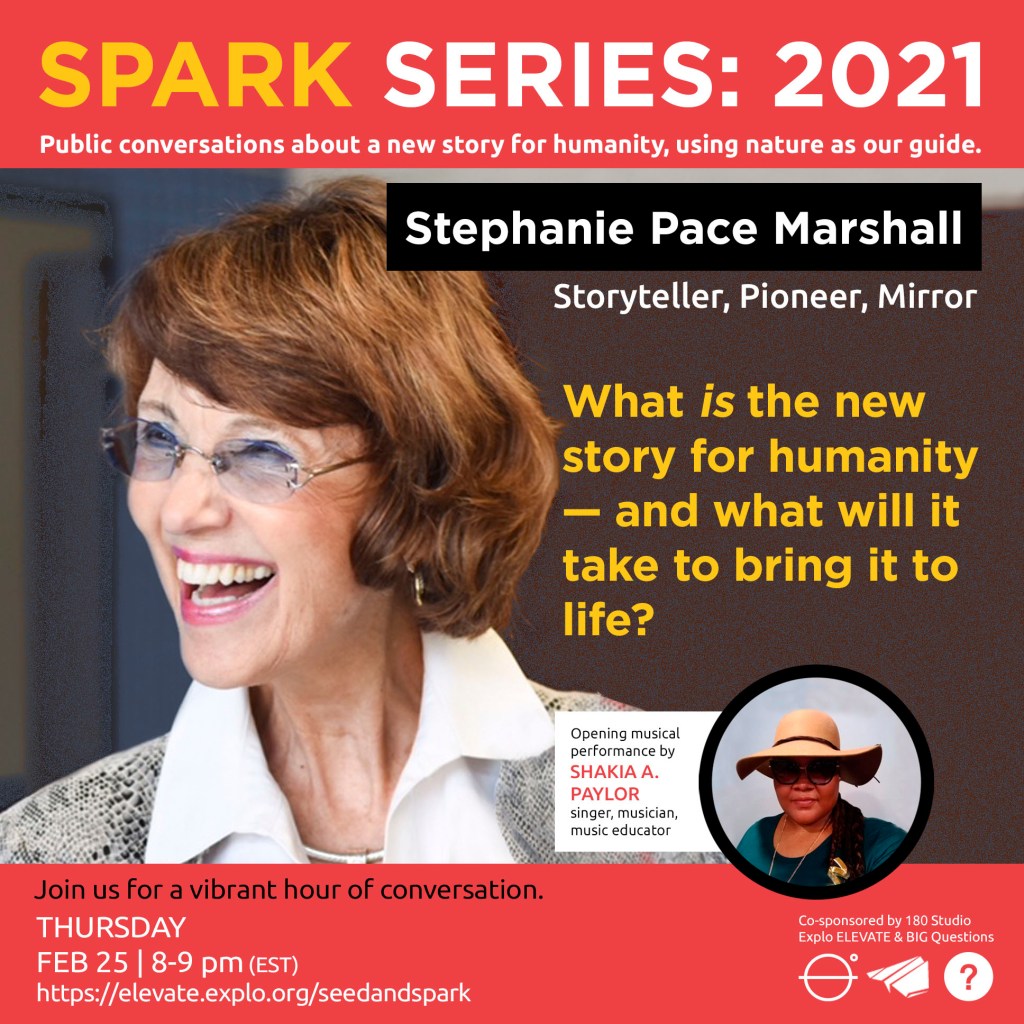 What is currently sparking your imagination or passion?

What principles or ideas can we apply to the future of learning?

Many organizations have been calling climate change an existential threat. I call the future of learning an existential threat. The climate didn’t damage itself, we did it with intention. We weren’t trying to do that to the climate, but the old story of competition, and lack of connectedness and interdependence, and dominance of the human form of life over the natural world. All of that brought us to this point: how we think about everything around us shapes, everything around us. I believe that our biggest existential threat is how we are shaping the minds of our children by design.

And we have a choice. But we have to shift the meta narrative and say the earth is a living system. [It has to be about] interdependence, not independence, collaboration, not competition.
A human system is a living system. That means it is not totally predictable. And it changes and creates through emergence. And emergence can come from disruption when someone pays attention.

What if I disrupt enough?

And you pick it up?

And it starts to move?

Things can change in an instant. Riots and protests can be emergent phenomena, you just need to put something in motion and there are enough people that pick it up and move with it. Things can happen very, very quickly. This is a very fertile time because so much is in motion, everything is being questioned. So whatever is grabbing whomever, it’s an opportunity for them to step into that movement, dialogue, conversation. Much is possible.

When I started my early teaching, one of the first things we did was learn each other’s story. Every child had an interview. Because you cannot hate someone whose story you know, and you cannot work with them deeply, and you cannot be vulnerable unless you know someone’s story and unless you are vulnerable and tell your own and listen to them. And so it sounds like a simple thing. How do you change? You know, what’s the new story of learning? Have every child tell every child their story. I put, you know, “every” in quotes, but certainly in classrooms, you can, you certainly can do that. You certainly can say, let’s create the ways we want to belong together.

How do we want to belong together?

Dr. Marshall will be participating in EXPLO Elevate’s ongoing Spark Series on February 25, 2021, at 8pm EST, held in partnership with 180 Studio and Big Questions Institute. This series is intentionally designed to be a departure from traditional talks. Join her via this Zoom link to actively participate and discuss the question: What is the new story for humanity and what will it take to bring it to life?”