Heroes and the Imagination: A New Moonshot

My memory of the moon landing, fifty-three years ago this July, is no doubt a blend of memory and embellishment.

I was so young it is difficult to unknit what actually happened from what has filled the space between fact and a four-year old’s fantasy of it. 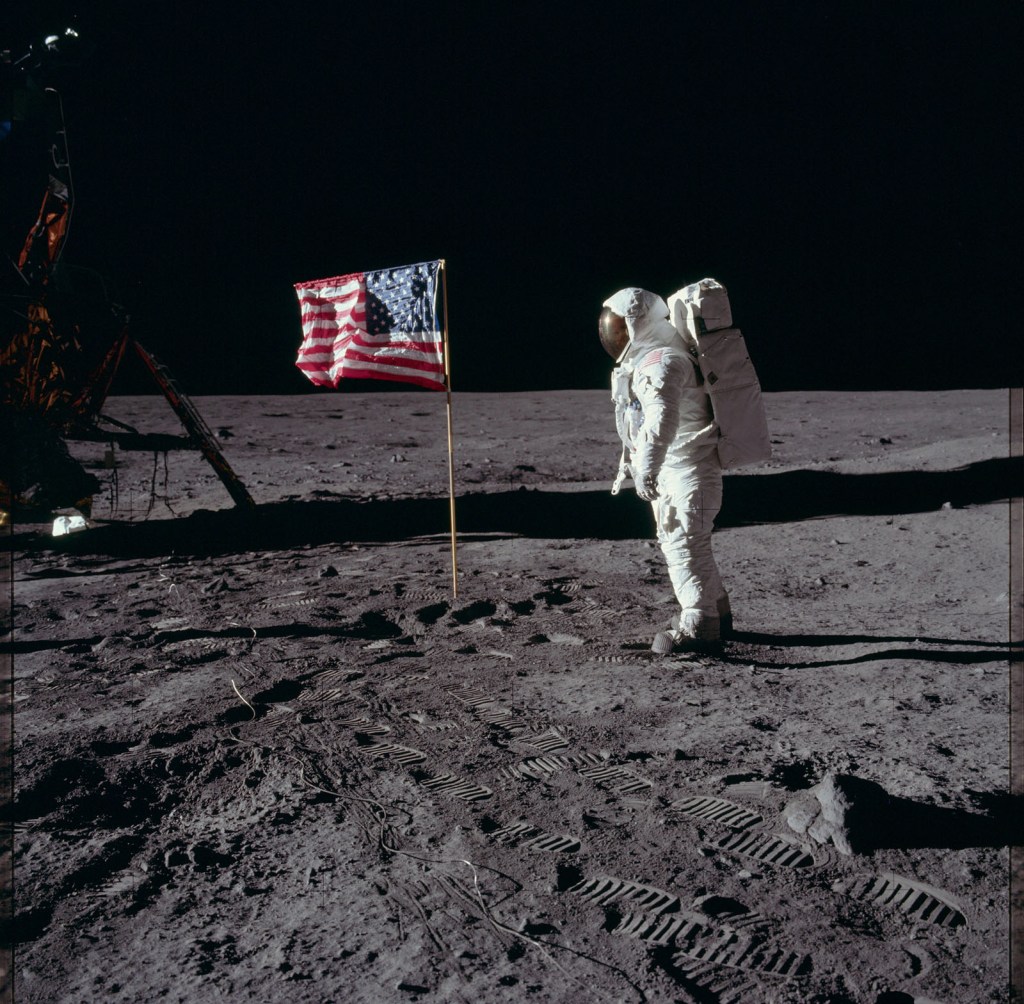 I definitely remember the popping and rumbling sound of the rocket lifting off from Cape Canaveral, and I remember the capsule landing and Neil Armstrong’s leg stepping down through the flickering black and white static of our black and white television set. I also remember lying on my back in the front yard during Apollo 11’s journey and staring at the moon drifting through White Oak branches as I felt the ground press against my back and sleepiness steal through me like a front.

I knew the astronauts’ names in the same way very small children can name myriad dinosaur species before they can remember the names of all their relatives. My fascination was endless. And it obviously wasn’t just me…naming Michael Collins, Buzz Aldrin, and Neil Armstrong as heroes was cultural glue for the United States at exactly the moment when we needed it most—it had been a rough decade, to say the least.

In short, all Americans, right down to four-year-olds and regardless of any distinction between us, could, with equal emphasis and shared ownership of their accomplishments, name the astronauts as heroes. Naming people held in such universal esteem today is far more challenging, if not impossible. 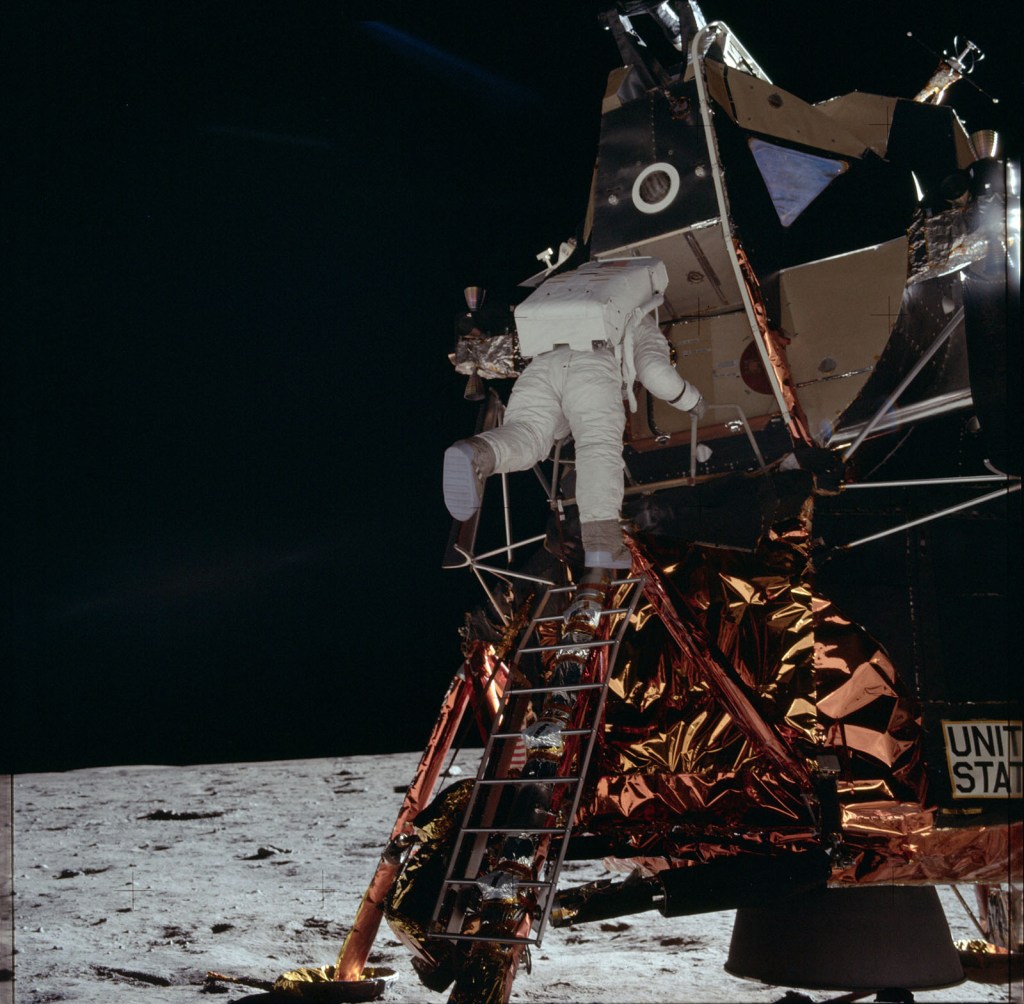 [The Apollo 11 Capsule, looks quite a bit like a jury-rigged HVAC system.]

Sometimes in order to express amazement, adults say things like (and I say things like), “I can’t imagine what X was like” or “I can’t imagine how they accomplished X.” Interestingly, children most often respond to something amazing by simply imagining it. Everyone my age in the summer of 1969, and through the lift-off of Apollo 17, felt the engines ignite on the launch pad, imagined weightlessness, walked on the moon, heard the atmosphere roar upon reentry, and splashed down somewhere in the Pacific Ocean.

We didn’t analyze the heroics of astronauts—instead, we played the parts, and we stepped in their heavy-looking moon boots simply by putting on our rain boots.

We need to commit to doing all we can to make sure children always do such imagining. Pinky-swear with me. I believe it is an essential part of our role. As an educator, I worry about the fracturing exposed in our inability to name shared heroes, and I worry about what it means for the way children perceive the possibilities of the world around them. That said, a fractured world is not the invention of the twenty-first century.

The current intensity of our divides should, I believe, push us to seek out the values and concepts that unite us. We must take our eyes off of what divides us long enough to seek things greater than our differences. To do so is a sort of daring faith that there are things greater than our differences. This may feel like a moonshot, but I know a generation of students ready to come with us.

There are all sorts of purposes to secondary education, such as preparing for college, learning to be part of a team, developing independence and learning about commitment, learning to hear and developing an appreciation of and understanding of the existential value of voices not our own, voices from the vastly different backgrounds, histories, ethnicities, choices, preferences. All of it.

There is also a need to preserve the characteristics embodied in the youngest among us—most vitally, we need to preserve and create space for their vast imaginations, uncompromised by the vitriol and division that has infected too much of the world of adults.

I believe there is a generation of students coming through right now who can rise above the most pressing challenges we face, and we need to support them, encourage them, and get out of their way.

In looking back over an earlier post–The Increasing Relevance of Great Schools in a Technology-Driven World –I found a paragraph that shares some connections with this post:

“As advanced as …technology…is, it is equally as limited. Students need a great school to make learning experiences more engaging and more collaborative, thus allowing us to prepare them to thrive in the lives they will lead.”

To all this, I would now tag on this: In addition to making “learning experiences more engaging and more collaborative,” a great school, one that strives to bring different backgrounds and experiences together, can help preserve rather than quash the imagination that drives the most powerful learning in our children. And even more, such an education will allow these young people to imagine and then create the world to come.

One day a man or woman will step on Mars and then on each planet in our solar system, and those few will be heroes like Neil Armstrong. We should be aware, however, that our children are already there and looking out ever further. 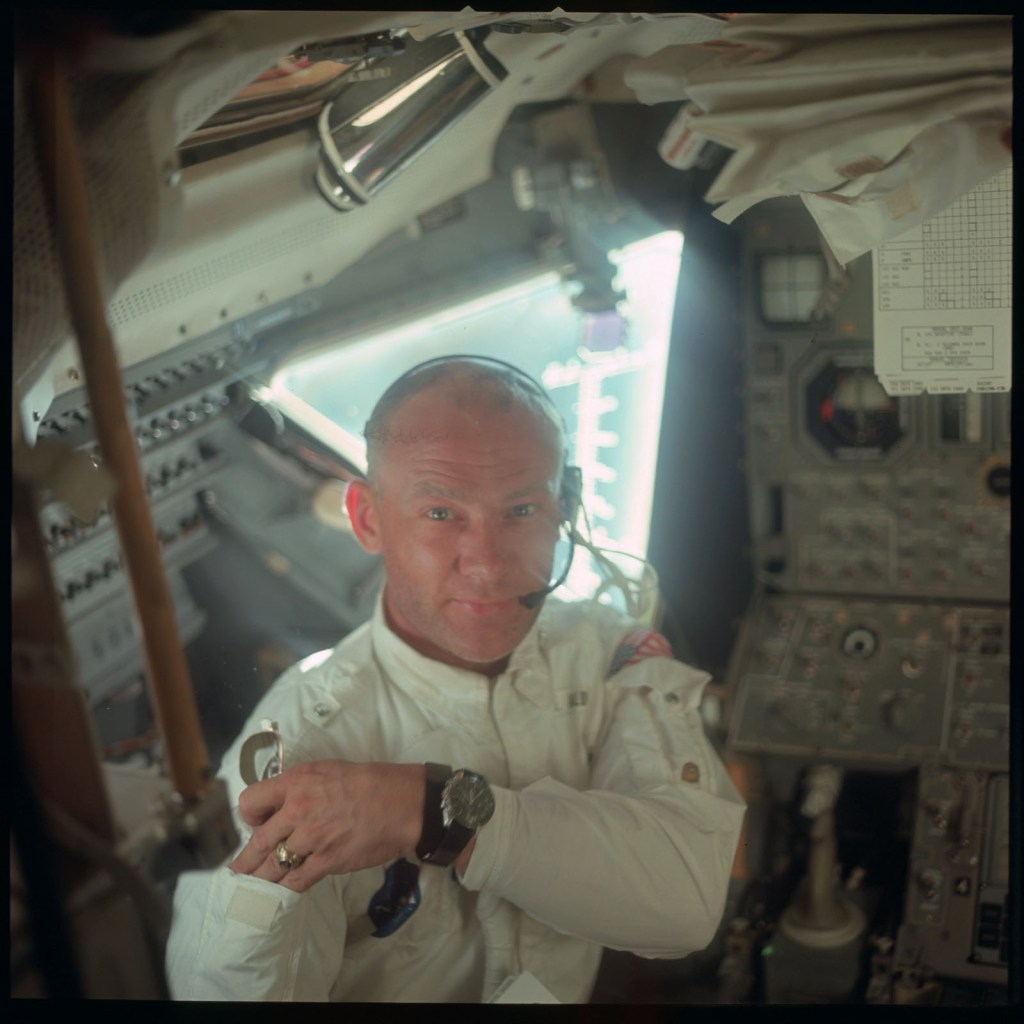 [Neil Armstrong, looking as if he was born to be the first man on the Moon]

All the photographs from the Apollo missions are available in the Public Domain through THIS LINK.