Future-Ready: A Conversation with Ted Dintersmith, Part I

Preparing Students to Thrive in the Fourth Industrial Revolution

On March 8, 2021, I had the opportunity to interview Ted Dintersmith, author of What School Could Be: Insights and Inspiration from Teachers Across America and co-author with Tony Wagner of Most Likely to Succeed: Preparing Our Kids for the Innovation Era, and executive producer of the documentary film of the same name. The interview was for research we are conducting on the implications of the Fourth Industrial Revolution (4IR) and what schools should be doing to help students thrive in a future that will be shaped by the 4IR.

The day after our interview, on March 9, Ted and his team at the What School Could Be initiative launched ”a new community-powered platform that — we immodestly claim — is the best professional development ever offered to educators. Based on your great work in the field, its confidence-building steps will unleash student — and teacher — potential.” You can learn more about this initiative here, and I also encourage readers to view the great resources on the What School Could Be Innovation Playlist.

I first met Ted when I worked for FIRST robotics. In 2016, he came to the FIRST World Championships in St. Louis and I had the privilege of giving Ted a tour of the event before we held a screening of Most Likely to Succeed. After the screening, Ted hung out for over 90 minutes with the parents and students, answering their questions, listening to their concerns, and offering advice. I was incredibly impressed with his passion and authenticity as he spoke with the FIRST students and families (see photo below). 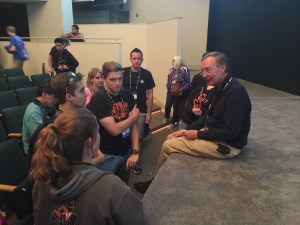 Below is Part I of the lightly edited transcript of our March 8 interview. Note: The original transcript was generated using the artificial intelligence-aided software Otter.ai.

Klaus Schwab from the World Economic Forum writes that the Fourth Industrial Revolution (4IR) is characterized by a fusion of technologies that are blurring the lines between the physical, digital, and biological spheres. Schwab believes that the 4IR is distinct from the Third Industrial Revolution due to its velocity, scope, and systems impact. He writes that the speed of current breakthroughs has no historical precedent, and when compared with previous industrial revolutions, the 4IR is evolving at an exponential rate, as opposed to a linear rate. And so my first question is, do you share that view? Do you feel that things are changing at an increasing rate as we go forward?

The 4IR is what got me focused on the issues around education. I spent 30 years in technology innovation. So I had a ringside seat, and I could see firsthand what’s going on, how it shifts in not just little ways but in massive ways the impact it’s having on what’s required for a career, and what’s required for citizenship.

It’s exponential growth, which people have the hardest of times conceiving – most people don’t understand how fast an exponential rate of change really is.

If anything, the pandemic has caused it to accelerate faster. And so today, if you can replace a human with some sort of an automated solution, you are going to do that. There are very few businesses that say “Oh no, no, I’d rather have more humans who have all these issues and could be brought down again by another round of pandemic” or whatever, and so you’re seeing an acceleration in change [due to the pandemic].

I think within 10 to 20 years, some sort of robot could win every single Olympic sport. And so if robots are better than humans at all this whole, wide mosaic of Summer and Winter Olympic sports, what aren’t they better at? It’s just a matter of time when anything physical will be done by robots, other than niche things or tiny things here and there. If it’s a fundamental job requiring muscle power, that’s gone. I mean really, just count on that. And then, you look at the cognitive stuff and you look at the role of data and advanced artificial intelligence. A lot of things we thought were safe, like composing music, aren’t. People said that composing music has a human dimension and you’ll never see it automated. But it already is.

I think that is absolutely bad news if we don’t change school priorities. And so that’s what I throw my body at every single day.

I think it’s worth underscoring that it’s nice to try to wish this away. It’s nice to wave your hands and say “yeah look at all the people that still have jobs.” Yes, pre-COVID we had near full employment. But look at the nature of those jobs, look at the economic insecurity that comes with those jobs, look at how many people are piecing together multiple jobs to keep food on the table, and then fast forward where suddenly a lot of that stuff is done with automated solutions. That’s deeply destabilizing to a democracy.

What skills, habits, and dispositions will people need to thrive in a future shaped by the 4IR?

I’m not disagreeing with priorities on creative problem solving, collaboration, communication, and critical thinking – those are all important. And then you’ll see that they keep adding things, like citizenship skills, and I think we’d agree with that, and also toss in something like compassion, fair enough.

But I think there are two things that are often glossed over that are really important.

One of the things that I think separates the people on the right side of innovation versus the wrong side is not just having a tolerance for ambiguity, but a willingness to embrace ambiguity.

So many people will say “well wait a minute, that makes me nervous because I don’t know how it’s gonna work out so I’m backing off of that.” As you know, people that change the world just say, “Whoa, that’s scary, but I’m confident I can figure it out as I go”. The fact that it’s unclear to me means it’s probably unclear to everybody else.

Do you like walking on defined walking paths, or do you love heading into an unexplored forest and just kind of bushwhacking your way through? I think schools largely push kids away from ambiguity. Parents pile on. They say “you didn’t make it clear what my child had to do to get an A.” They lack the willingness to lean into ambiguity. They need a bit of a fearless sense that I can learn what I need to learn, draw on resources accordingly, and shift my initial path to something different that will actually work and yield a positive outcome.

The second thing that I think is absolutely true, is that all of these advances in machine intelligence are making some people far more productive while marginalizing other people, flat-out putting them out of work. The people that are going to do well are the ones on the right side of that, and the right side is often confused as being the person developing these tools. “I’m going to be a machine learning expert.” Well, that’s a good thing to be, and there will be jobs for that. But for every one job that is developing these tools, there’s an unlimited number of jobs of using these tools.

An example, quite relevant to today’s world where we are talking about Zoom and how everybody’s doing things on Zoom. I promise if you were an enterprising 13-year-old who said “I’m going to spend the next two weeks and understand every intricacy of Zoom, and then I’m going to be entrepreneurial and market my capabilities,” that 13-year-old would be cleaning the clock when it comes to generating consulting revenue, and the groups that need help wouldn’t be asking what your grade point average is, or tell me about your neighborhood or ethnicity, or what were your PSAT scores. They’d say “look at these customer testimonials! This 13-year-old can really hold my hand on this Zoom thing I’m doing where there’s a lot at stake, and can help me make sure I do it right.” Will our colleges teach Zoom skills? No. Community colleges? No. High schools? No, No one will.

We don’t see 13-year-olds getting good at things because they’re not conditioned to think of the world in terms of jumping on emerging opportunities, leveraging available resources to teach themselves when they need to become somewhat of an expert on something. And then learning to market their capabilities entrepreneurially. And there are not just one of these opportunities – there is a massive expanse of these opportunities which to a very large extent go unmet. These needs are exploding. And the question is, why isn’t that an important component of school? In school, if you leverage all available resources, you’re often expelled. And to me that’s lunacy.

This discussion reminds me of an experience I had when I worked at FIRST robotics. I was at their annual Global Innovation Award ceremony at the US Patent and Trade Office, in which they recognize the top 20 ideas that came from the students working on the FIRST LEGO League challenge. The winners receive support in obtaining patents for their ideas and bringing them to market.

On stage, the master of ceremonies was interviewing four of the finalists and asked them “What do you want to do when you grow up?” An eleven-year-old named Arvind said “What do you mean when I grow up? I’m doing it now – I’ve already started my career!” Arvind and his team invented a trash sorter, and they had plans to get a provisional patent for their device and take it to market. We condition students that they have to wait until they finish their schooling and “grow-up” – whatever that means – before they can do anything that has value or meaning, when in reality, with all the tools and resources available to students, they can be doing amazing things today.

This is a good segue to my next question: What should schools be doing to develop these skills, habits, and dispositions?

See Ted’s response in Part II of the conversation. You can also view an earlier post in our 4IR series, “Is it a Robot?“