Beyond the Event Horizon: Curricular Transformation

by Greg Cooper, Dean of Studies at EXPLO Senior.

The third in a series about how the laws of physics informed my school’s decision to cut APs.

The event horizon of a black hole is a chaotic place, a “point of no return,” the border beyond which even light cannot escape.

That final edge is a swirling mass of all sorts of matter — an accretion of everything torn apart by this incredible force. But beyond that inhospitable border lies the vastness of space. A place where all that chaos can no longer have an impact. A place where what once seemed impossible is now not only possible but awash with opportunity.

As I wrote in a previous post, schools are not black holes, though they can sometimes feel like them. Thus, the question isn’t whether we can escape the forces holding us back but how we chart a path forward.

When my former school began the process of moving away from AP classes in some areas, the task was daunting. The college process, the standardized test world, and the anxieties of parents and students loomed large. But we knew that if only we could get ourselves beyond that event horizon, away from the pull of gravity and through the chaos and noise, the vast space that would open up before us — the opportunities for curricular innovation — would be limited only by our resources and depth of expertise.

After devising a strategy for seeing through those things that were distorting our view of what was possible and after figuring out how to take advantage of the forces at our disposal to plot a plausible path ahead, it was time to plan just how we’d capture that final burst of breakaway speed to get us past the event horizon. 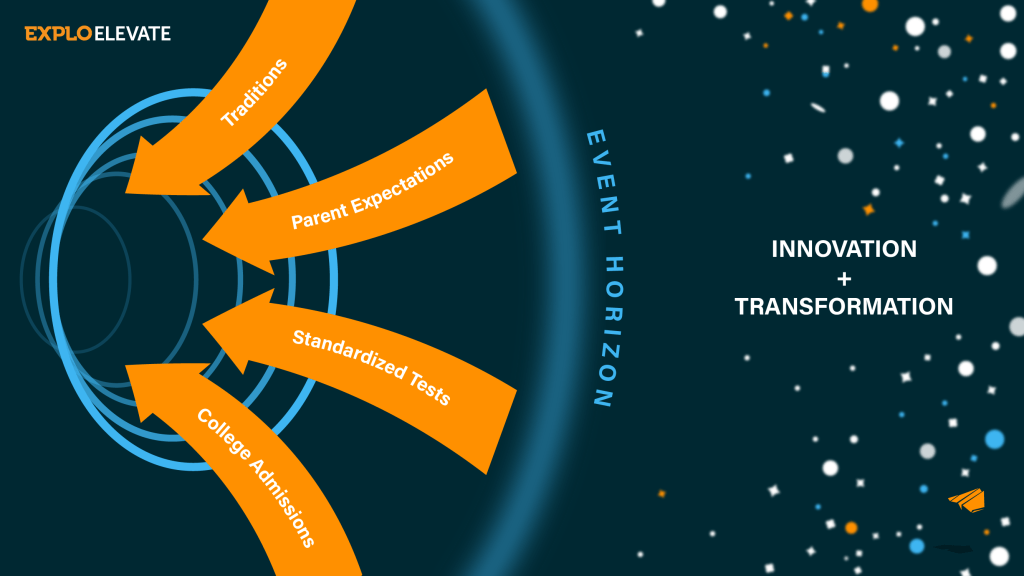 So what did we do, and why did it seem to work?

As I have previously written, engagement with both colleges and our community of parents was critical. As long as we had a clear way of denoting rigor and challenge, most arguments for the importance of having APs on a transcript — just for the sake of having APs — melted away. At the same time, some of the other benefits remained — notably, the potential for future course placement and/or college credit.

This two-year process to phase in a suite of new classes as one-to-one replacements for some of the school’s rather large array of AP offerings is now underway. It’s still early, but initial reports are positive.

As one of my former students — who is now taking a replacement for AP Environmental Science (“Advanced Environmental Science and the South Florida Ecosystem”) — put it, “this year’s class feels way more fulfilling than it probably would have been to take the AP. I’m really excited at the prospect of going out on the boat and taking measurements out on the bay. It became clear within the first few classes that the shift [away from the AP curriculum] was going to make the class way more interesting.”

So many things in the world of education are out of our control as school leaders, but curriculum isn’t one of those things. The constraints on and resources of our schools may all be different, and the choices that made sense for my former school are not as clear-cut for others, but the point is that bold curricular change is possible, even in the face of today’s inhospitable landscape.

Shortly before his death in 2018, physicist Stephen Hawking — one of the foremost experts on black holes and theoretical physics of all sorts — gave a lecture in which he discussed some recent evidence that contrary to what many originally thought, some radiation can possibly escape from the grip of a black hole. He said, “The message of this lecture is that black holes ain’t as black as they are painted. They are not the eternal prisons they were once thought. Things can get out of a black hole, both to the outside, and possibly, to another universe. So, if you feel you are in a black hole, don’t give up. There’s a way out.”

Greg Cooper is the Dean of Studies at EXPLO Senior. He was previously the Upper School Dean of Studies and a History & Social Sciences teacher at the Ransom Everglades School in Miami, Florida. This was PART THREE in his series about how we can use the Laws of Physics to reimagine how we tackle the massive obstacles schools face. Be sure to read, PART ONE, Gravitational Lensing and the Educational Universe, and PART TWO, Finding the Escape Velocity for Dramatic Policy Changes.